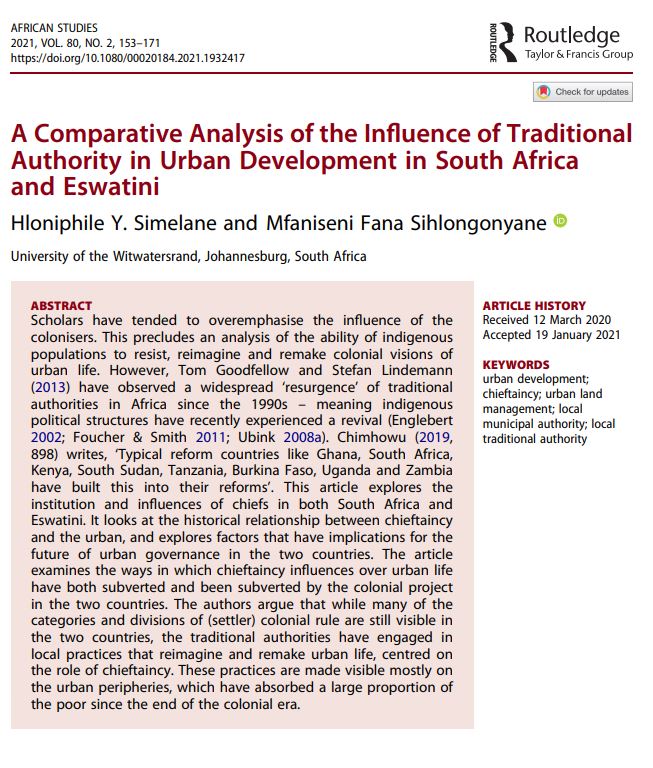 Scholars have tended to overemphasise the influence of the colonisers. This precludes an analysis of the ability of indigenous populations to resist, reimagine and remake colonial visions of urban life. However, Tom Goodfellow and Stefan Lindemann (2013) have observed a widespread ‘resurgence’ of traditional authorities in Africa since the 1990s – meaning indigenous political structures have recently experienced a revival. Chimhowu (2019, 898) writes, ‘Typical reform countries like Ghana, South Africa, Kenya, South Sudan, Tanzania, Burkina Faso, Uganda and Zambia have built this into their reforms’.

This article explores the institution and influences of chiefs in both South Africa and Eswatini. It looks at the historical relationship between chieftaincy and the urban, and explores factors that have implications for the future of urban governance in the two countries. The article examines the ways in which chieftaincy influences over urban life have both subverted and been subverted by the colonial project in the two countries.

The authors argue that while many of the categories and divisions of (settler) colonial rule are still visible in the two countries, the traditional authorities have engaged in local practices that reimagine and remake urban life, centred on the role of chieftaincy. These practices are made visible mostly on the urban peripheries, which have absorbed a large proportion of the poor since the end of the colonial era.

Mining and Community in the South African Platinum Belt

A handbook on urban land markets for Africa