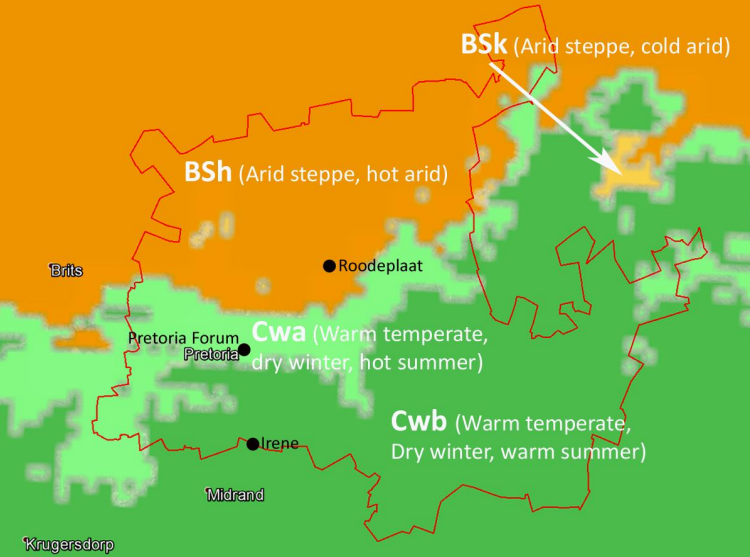 The purpose of this paper is to research the expected effect of climate change on South African cities, with specific reference to Pretoria. A bioclimatic analysis is used to quantify the most appropriate mitigation techniques for new and existing structures. With increased climate change, it is increasingly important that South African cities and buildings are resilient. Recent research predicts that Southern Africa can expect a temperature increase of between 4°C and 6°C in the hot western areas. Significant warming is expected in cities where high temperatures will be exacerbated by the Urban Heat Island (UHI) effect. In this research weather files were generated for the current climatic conditions of the three main climatic regions of Pretoria. Subsequently synthetic weather files were generated to quantify the effect of climate change up to the year 2100.

An A2 climate change scenario of the Special Report on Emission Scenarios (SRES) for the period 1961-2100 was used. An A2 scenario can be described as business as usual. Recent research indicates that this is the most likely scenario for South Africa. Using these weather files a comprehensive bioclimatic analysis was firstly run to quantify the current appropriate passive design measures and secondly to determine changes caused by climate change. This was further analysed in relation to proposed passive design measures. The results indicate that a significant amount of mitigation is possible if the correct engineered bioclimatic design approaches are used and complimented by other beneficial building and urban techniques such as the use of cool roofs and urban vegetation.