Insights from a South African Township 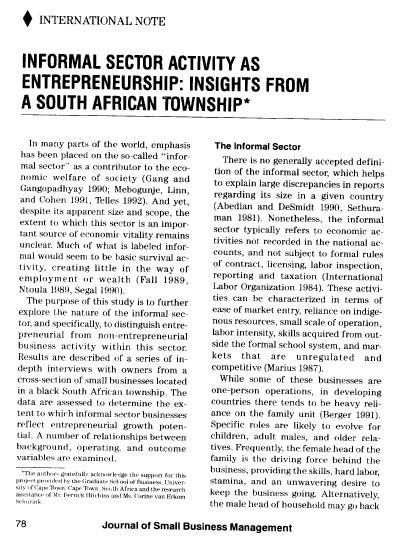 In many parts of the world, the emphasis has been placed on the so-called “informal sector” as a contributor to the economic welfare of society (Gang and Gangopadhyay 1990; Mebogunje, Linn, and Cogen 1991; Telles 1992). And yet, despite its apparent size and scope, the extent to which this sector is an important source of economic vitality remains unclear. Much of what is labeled informal would seem to be basic survival activity, creating little in the way of employment or wealth (Fall 1989, Ntoula 1989, Segal 1990).

The purpose of this study is to further explore the nature of the informal sector, and specifically, to distinguish entrepreneurial from non-entrepreneurial business activity within this sector. Results are described as a series of in-depth interviews with owners from a cross-section of small businesses located in a black South African township. The data are assessed to determine the extent to which informal sector businesses reflect entrepreneurial growth potential. A number of relationships between background, operating, and outcome variables are examined.

The Role of Land in Achieving Adequate and Affordable Housing

The Uneven Geography of the Covid-19 Crisis