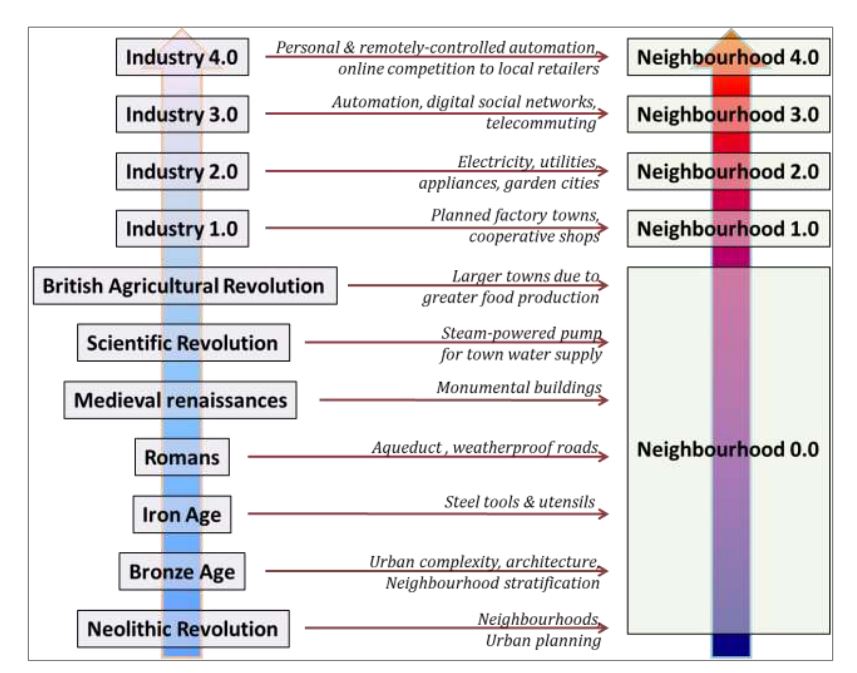 South Africa's commitment to meeting the Sustainable Development Goal (SDG) 11, "Make cities and human settlements inclusive, safe, resilient and sustainable", requires the country to have an understanding of the range of possible, likely and preferred urban futures. With concepts such as digital cities, smart cities, smart infrastructure, smart places and urban resilience, it is evident that there has been some consideration of cities and infrastructure of the future. However, little is known about urban futures at a neighbourhood level. Therefore, the idea of investigating possible urban futures provides an opportunity for exploring the implications of the global forces of change and urban issues that are shaping not only cities, but neighbourhoods as well.

The "Fourth Industrial Revolution" and "Industry 4.0" are labels being applied now to the era of cyber-physical systems that go beyond mere automation, with industries and systems that are decentralized but integrated and transparent, self-optimizing, self-configuring and self-diagnosing. It encompasses concepts such as smart factories, the Internet of things, and highly-flexible mass customization. Broadly, the Third Industrial Revolution was then driven by computers, the Second by electricity and the First by steam power.

Whether hyperbole or a fad or a black swan or the natural evolution of automation or a paradigm shift or even a new opportunity for developing countries to leapfrog past the developed world, what are the implications of the Fourth Industrial Revolution for human settlements? What is needed by cities, towns, neighbourhoods and dwellings to benefit from Industry 4.0? Will Industry 4.0 benefit only human settlements that are well resourced and populated by the rich and well-educated, or can Industry 4.0 actually benefit impoverished communities?