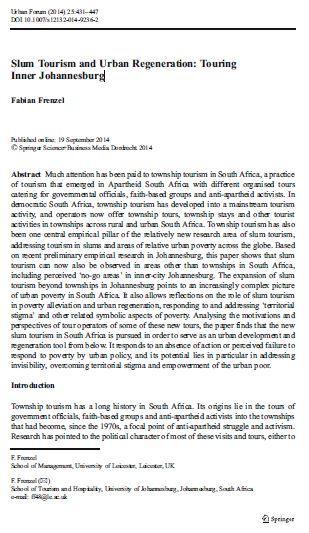 Much attention has been paid to township tourism in South Africa, a practice of tourism that emerged in Apartheid South Africa with different organised tours catering for governmental officials, faith-based groups and anti-apartheid activists. In democratic South Africa, township tourism has developed into a mainstream tourism activity, and operators now offer township tours, township stays and other tourist activities in townships across rural and urban South Africa. Township tourism has also been one central empirical pillar of the relatively new research area of slum tourism, addressing tourism in slums and areas of relative urban poverty across the globe. Based on recent preliminary empirical research in Johannesburg, this paper shows that slum tourism can now also be observed in areas other than townships in South Africa, including perceived ‘no-go areas’ in inner-city Johannesburg. The expansion of slum tourism beyond townships in Johannesburg points to an increasingly complex picture of urban poverty in South Africa. It also allows reflections on the role of slum tourism in poverty alleviation and urban regeneration, responding to and addressing ‘territorial stigma’ and other related symbolic aspects of poverty. Analysing the motivations and perspectives of tour operators of some of these new tours, the paper finds that the new slum tourism in South Africa is pursued in order to serve as urban development and regeneration tool from below. It responds to an absence of action or perceived failure to respond to poverty by urban policy, and its potential lies in particular in addressing invisibility, overcoming territorial stigma and empowerment of the urban poor.