The Case for Regional Development Intervention 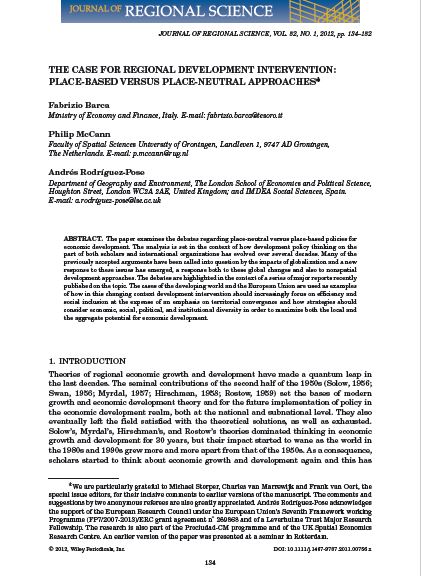 The paper examines the debates regarding place-neutral versus place-based policies for economic development. The analysis is set in the context of how development policy thinking on the part of both scholars and international organizations has evolved over several decades. Many of the previously accepted arguments have been called into question by the impacts of globalization and a new response to these issues has emerged, a response both to these global changes and also to nonspatial development approaches. The debates are highlighted in the context of a series of major reports recently published on the topic. The cases of the developing world and the European Union are used as examples of how in this changing context development intervention should increasingly focus on efficiency and social inclusion at the expense of an emphasis on territorial convergence and how strategies should consider economic, social, political, and institutional diversity in order to maximize both the local and the aggregate potential for economic development.

Determining the availability of, and access to, fresh fruit and vegetables in Arcadia and Eastwood, Pretoria