Library / The Socio-Economic and Cultural Implications of Skhotane 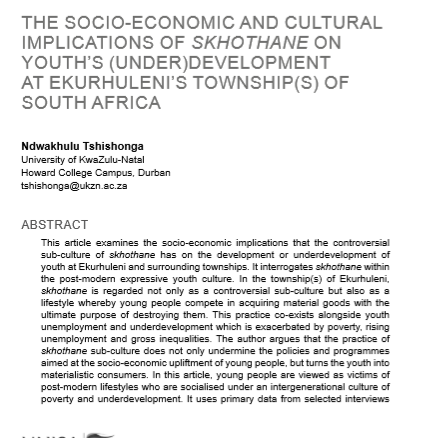 This article examines the socio-economic implications that the controversial sub-culture of skhothane has on the development or underdevelopment of youth at ekurhuleni and surrounding townships. It interrogates skhothane within the post-modern expressive youth culture. In the township(s) of ekurhuleni, skhothane is regarded not only as a controversial sub-culture but also as a lifestyle whereby young people compete in acquiring material goods with the ultimate purpose of destroying them. this practice co-exists alongside youth unemployment and underdevelopment which is exacerbated by poverty, rising unemployment and gross inequalities. the author argues that the practice of skhothane sub-culture does not only undermine the policies and programmes aimed at the socio-economic upliftment of young people but turns the youth into materialistic consumers. In this article, young people are viewed as victims of post-modern lifestyles who are socialised under an intergenerational culture of poverty and underdevelopment. It uses primary data from selected interviews with skhothane members and general members of local communities and secondary sources from books, accredited journals and newspapers.

A national overview of spatial trends and settlement characteristics