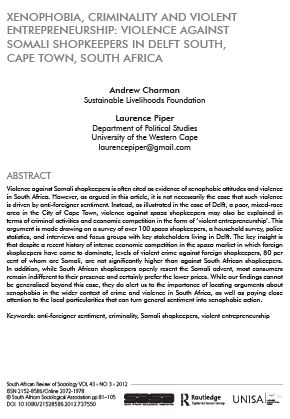 Violence against Somali shopkeepers is often cited as evidence of xenophobic attitudes and violence in South Africa. However, as argued in this article, it is not necessarily the case that such violence is driven by anti-foreigner sentiment. Instead, as illustrated in the case of Delft, a poor, mixed-race area in the City of Cape Town, violence against spaza shopkeepers may also be explained in terms of criminal activities and economic competition in the form of ‘violent entrepreneurship’. This argument is made drawing on a survey of over 100 spaza shopkeepers, a household survey, police statistics, and interviews and focus groups with key stakeholders living in Delft. The key insight is that despite a recent history of intense economic competition in the spaza market in which foreign shopkeepers have come to dominate, levels of violent crime against foreign shopkeepers, 80 percent of whom are Somali, are not significantly higher than against South African shopkeepers. In addition, while South African shopkeepers openly resent the Somali advent, most consumers remain indifferent to their presence and certainly prefer the lower prices. While our findings cannot be generalised beyond this case, they do alert us to the importance of locating arguments about xenophobia in the wider context of crime and violence in South Africa, as well as paying close attention to the local particularities that can turn general sentiment into xenophobic action.

Voices of the poor