Overcoming the Legacy of Exclusion in South Africa 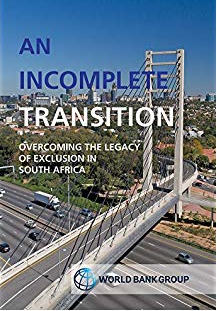 South Africa has come a long way since the advent of democracy, but its transition remains incomplete. The first three clauses of the Freedom Charter—the historic 1955 document setting out the central objectives of the democratic movement—were (i) the people shall govern; (ii) all national groups shall have equal rights; and (iii) the people shall share in the country’s wealth. While the first two objectives have largely been achieved since the first democratic elections of 1994, historical disadvantage remains a determinant of income, wealth, and opportunity, notwithstanding some progress. As such, the economic transition from a system of exclusion under segregation and apartheid remains incomplete.

Poverty has declined significantly since 1994, but inequality remains extremely high. Improved access to basic services (such as electricity, water, and sanitation), the provision of over 4 million houses through state programs, and the expansion of the social wage have considerably improved living standards for millions of South Africans. Creating jobs, especially for young people, is critical to overcome the legacy of exclusion. Jobs are also important to build a stronger social contract. Large-scale job creation reduces economic vulnerability and helps transform the economy to become more representative of the population.

The World Bank Group’s twin goals are to help countries eliminate poverty by 2030 and boost shared prosperity (that is, reduce inequality). These goals are also enshrined in South Africa’s Vision 2030 in the National Development Plan. This SCD identifies five key constraints. These are (i) insufficient skills; (ii) the skewed distribution of land and productive assets, and weak property rights; (iii) low competition and low integration in global and regional value chains; (iv) limited or expensive spatial connectivity and under-serviced historically disadvantaged settlements; and (v) climate shocks: the transition to a low-carbon economy and water insecurity. The World Bank Group views insufficient skills as the key constraint to reducing poverty and inequality. Skills are critical for both labor supply and demand: they raise the productivity of workers and entrepreneurs, help firms expand production at competitive prices, lead to additional hiring, boost aggregate demand, and contribute to a growing economy.

The highly skewed distribution of land and productive assets is a source of inequality and social fragility, fuelling contestation over resources. Property rights are weak or under pressure. Despite some progress, wealth and land ownership remain highly concentrated. Low levels of competition and integration into global and regional value chains deter growth and job creation. They also keep prices high, especially for the poor. Exclusion is also underpinned by limited or expensive connectivity, and under-serviced historically disadvantaged settlements. Many South Africans continue to live far from job opportunities in under-serviced townships, informal settlements, and the former homelands. Climate change will impose considerable costs on South Africa, which relies heavily on coal to power its economy. Managing the low-carbon transition and addressing water insecurity will be critical. Cheap coal was one of the key factors in the country’s development, and the economy remains heavily dependent on coal for energy and mining.