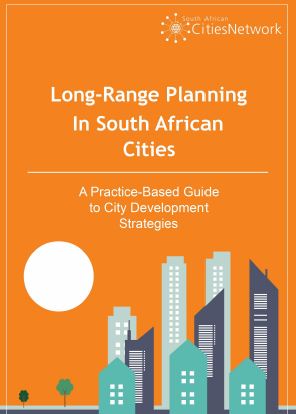 City Development Strategies (CDS) are institutional and community planning processes that contemplate a city’s possible futures, resulting in a strategy for the long term (a 10-50-year period), coordinated, cross-sector, multi-issue development of an urban jurisdiction that inform and are informed by shorter-term plans and initiatives. CDS as a concept has been championed as a critical method of reflecting on urban change for cities across the world by the Cities Alliance (www.citiesalliance.org) and the World Bank since the late 1990s.

Such strategies have been adopted by South African Cities Network (SACN) since the early 2000s. South African cities have used CDS as a means of grounding medium terms plans (e.g. Integrated Development Plans (IDPs) and Spatial Development Frameworks (SDFs)), and have in time gained significant experience in coordinating these processes. The South African Cities Network was established in 2002 by the Minister for Provincial and Local Government, in collaboration with the mayors of South Africa's largest cities. One of the organisation’s objectives is to promote good governance and management in South Africa. It is for this reason that SACN has supported and contributed to the popularisation and implementation of CDS in South Africa through the coordination, compilation and promotion of the strategies. This has positioned SACN to assess the last 15 years’ experience of undertaking CDS in South Africa, and to guide the continued discussion, compilation and implementation of these strategies.

The purpose of this Guideline is to provide local government officials, councillors, practitioners, with a suggested methodology for implementing city development strategies based on SACN’s experience and that of its member cities. The guideline will also provide insight into CDS for the private sector, residents and communities. The methodology defined here for undertaking and improving a CDS is not definitive. There are many ways of conceptualising or undertaking a city development strategy. Certain components can be added or removed, or reinterpreted to fit a city’s institutional and political history, and the needs of communities. Importantly, the guidelines are aimed at providing a means of thinking about the future of South African cities in the current context, and coordinating and directing resources be they institutional or physical in moving towards an agreed to future that will realise better urban development.