Library / Operation of the market study - the case of Maputo 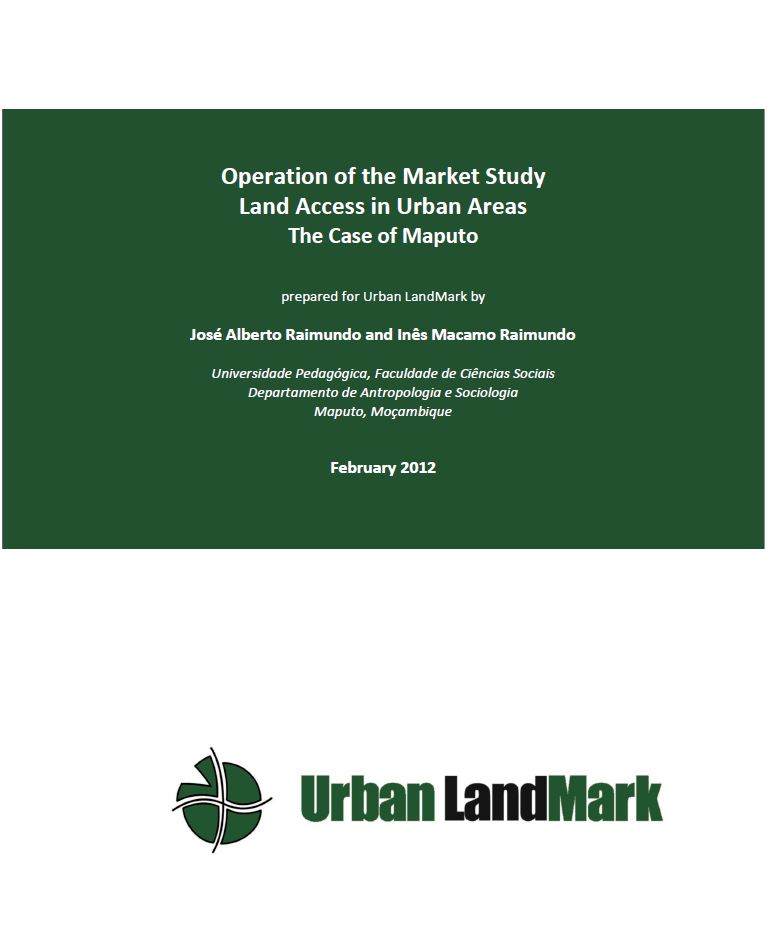 In 2010, Urban LandMark together with partners from Universidade Eduardo Modlane and Universidade Pedagogica undertook a survey to understand how ordinary urban dwellers access, hold and transact land in two peri-urban sites in Maputo.

The study used both qualitative and quantitative data sources, which consist of survey material collected from 568 households located in two peri-urban sites in Maputo - Hulene B and Luis Cabral. Survey data was complemented with key informant interviews held with municipal officials, secretarios de bairros, officials at the National Directorate of Geography and Cadastre (DINAGECA) and ward secretaries.

Although they are both located in the suburbs of Maputo city, Luis Cabral was established as a settlement for workers from the Maputo harbour, and has a longer history of urban settlement than Hulene B. Hulene B is a more recently established bairro, housing internally displaced people from the civil war and floods.

In the area where the surveys were conducted, many households lived on a rubbish dumpsite, in potentially hazardous conditions. While the majority of the plots in Luis Cabral have been surveyed, have wider roads and are generally better planned, Hulene B is largely unplanned.

Despite the differences between the two neighbourhoods, the study found no variations in the nature of land ownership and tenure. In both settlements, the vast majority of households do not have formal title. Most land is acquired through mechanisms that are outside the formal land registration system.

The findings of this study challenge conventional understandings of the formal and informal sector in African cities. First, informal systems are not always the chaotic mess they are perceived to be. The research found that there exists a sophisticated system of land registration, regulation and management in peri-urban areas where households do not have formal land title.

Secondly, although much of the land is accessed and secured verbally or through agreements with social networks, state agents are often critical to lending credibility to informal practices. It is not just that these spheres of authority overlap at given points in the process; they produce hybridised practices - melding both official and unofficial processes. Thus, the official and unofficial processes collapse into each other, producing new land practices in the city.

Thirdly, despite the fact that few households in the study areas have formal title to land or documentation - less than 3% of households claimed to have a DUAT, and only 30% had a declaracao - the majority of households (68%) reported that their sense of rights to place were strong because the local land practices had social legitimacy.

Moreover, if households' investments in their properties are a sign of their sense of security in a place, then households in both neighbourhoods seem to feel relatively secure - 72% of those surveyed had made housing improvements since they had moved in.

These findings tell an important story of the significance of local land practices in creating opportunities for urban dwellers to secure land rights in the absence of an accessible and affordable formal system. The findings not only shed light on our understanding of how urban territory is carved up and managed; they underscore the ways in which we conceptualise African cities, with implications for both urban theory and practice.

The findings from this research was also presented as a paper titled "One step at a time: Using survey data to inform an incremental tenure approach to land security in Maputo's peri-urban areas" at the Annual World Bank Conference on Land and Poverty in April 2012.

'Operation of the market' study: results from the survey in two settlements in Maputo, Mozambique [1.23MB]

One step at a time: linking the tenure security continuum concept to the findings of Urban LandMark's operation of the market study in Maputo [212KB]

One step at a time: linking the tenure security continuum concept to the findings of Urban LandMark's operation of the market study in Maputo [271KB]

Learning materials based on this work are also available here.