Library / Relocation: To be or not to be a black diamond in a South African township?

Relocation: To be or not to be a black diamond in a South African township? 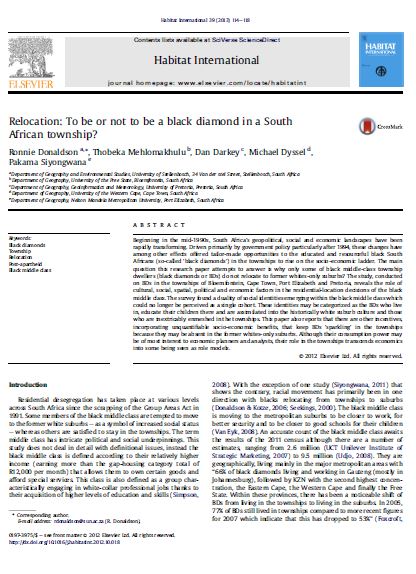 Beginning in the mid-1990s, South Africa's geopolitical, social and economic landscapes have been rapidly transforming. Driven primarily by government policy particularly after 1994, these changes have among other effects offered tailor-made opportunities to the educated and resourceful black South Africans (so-called ‘black diamonds’) in the townships to rise on the socio-economic ladder. The main question this research paper attempts to answer is why only some of black middle-class township dwellers (black diamonds or BDs) do not relocate to former whites-only suburbs? The study, conducted on BDs in the townships of Bloemfontein, Cape Town, Port Elizabeth, and Pretoria, reveals the role of cultural, social, spatial, political and economic factors in the residential-location decisions of the black middle class. The survey found a duality of social identities emerging within the black middle class which could no longer be perceived as a single cohort. These identities may be categorized as the BDs who live in, educate their children there and are assimilated into the historically white suburb culture and those who are inextricably enmeshed in the townships. This paper also reports that there are other incentives, incorporating unquantifiable socio-economic benefits, that keep BDs ‘sparkling’ in the townships because they may be absent in the former whites-only suburbs. Although their consumption power may be of most interest to economic planners and analysts, their role in the townships transcends economics into some being seen as role models.

Guidelines for the identification of well-located land for human settlements