Library / The Effects of Spatial Planning on Local Economic Development

The Effects of Spatial Planning on Local Economic Development

How has the Orlando eKhaya precinct plan impacted upon local businesses in Orlando, Soweto? 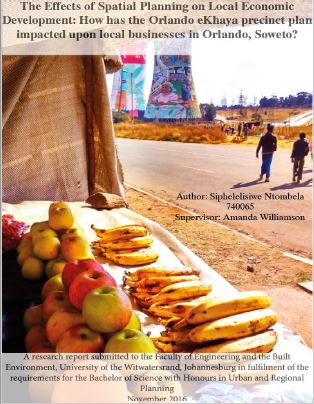 Post-apartheid transformation is based on focusing on previously neglected areas and improving their economies to eradicate inequality and segregation. Strategic spatial plans tend to focus on a limited number of strategic areas that require intervention, while LED focuses on the improvement of the local economy. Both of these planning mechanisms can be regarded as tools to restructure the space economy in post-apartheid SA. Government initiatives, namely the National Treasury’s Neighbourhood Development Partnership Grant (NDPG), have been designed to facilitate economic growth and development in township areas, informal settlements, and other marginalised settlements. The importance of focusing on improving the economic vitality and fostering social development in townships is twofold: firstly, for eradicating the economic stagnation and correcting the infrastructure deficit in townships and secondly, addressing the lack of integration of townships within the greater economy of the city.

As a recipient of the NDPG, the Orlando eKhaya plan provides a useful scale to understand the relationship between strategic spatial planning and LED. The study sought to find out how this plan impacts upon local businesses in Orlando, Soweto, and specifically those in and around Bara Mall. The study draws on the experiences and perceptions of small business owners, in both the formal and informal sector. Face to face interviews with the business owners were conducted and policy documents were also consulted to provide a background to the planning interventions observed in Soweto. A desktop analysis of the spatial changes and economic performance of Soweto was also done to understand the realities of the space economy of Soweto and Johannesburg.

It was found that all business were first time business owners, which may be an indication of a blossoming entrepreneurial spirit in the township. However, this entrepreneurial activity occurs in a survivalist manner as business owners had minimal prospects of growing their businesses. The study found that formal businesses at Bara Mall are not profitable as most of them only make enough money to cover expenses. Many shops at the mall have closed due to high rents and their businesses are not benefitting from the surrounding developments. The main issues faced by the formal business owners were the lack of integration with surrounding developments and increased competition from informal traders. Another challenge was the departure of bigger businesses and banks (which results in fewer customers for the small businesses that remain). The shopping mall has provided a new trading zone for informal traders but their timeous evictions by the police reveal that hostile working conditions persist despite the traders’ negotiations to occupy the space. Although they benefit from the foot traffic outside the mall, the traders only make enough profits “to put food on the table” – like the majority of survivalist enterprises. All interviewees continued to buy their supplies from the city centre – which continues to reinforce the spatial and economic inequality between Johannesburg and the township. The poor performance of both formal and informal businesses provides some insight into the manner in which strategic planning and LED intersect in the township context. The dominant model for LED in townships has been found to be shopping malls – which attract informal activities. While the research sought to interrogate the Orlando eKhaya precinct plan’s ability to bring about LED, it emerged from the research findings that everyday realities may hinder the realisation of integrated strategic spatial planning in the envisaged manner. It has emerged that strategic spatial plans bring about unintended consequences, some of which are positive and benefit small businesses. Strategic planning in post-apartheid South Africa (especially in the township context) has been found to have minimal impacts on the ground and unable to adequately grapple with local conditions. There is an insufficient use of strategic planning as an instrument in LED in the case of Orlando eKhaya as the development of small businesses is not prioritised. Following the findings and analysis, the study provides recommendations for LED, strategic planning and the facilitation of the development of small businesses.