Library / The Nature of the South African Informal Sector as Reflected in the Quarterly Labour-Force Survey, 2008-2014 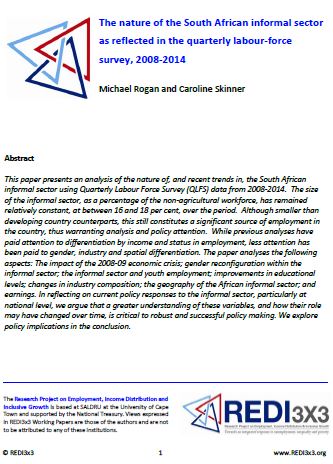 This paper presents an analysis of the nature of, and recent trends in, the South African informal sector using Quarterly Labour Force Survey (QLFS) data from 2008-2014. The size of the informal sector, as a percentage of the non-agricultural workforce, has remained relatively constant, at between 16 and 18 percent, over the period. Although smaller than developing country counterparts, this still constitutes a significant source of employment in the country, thus warranting analysis and policy attention. While previous analyses have paid attention to differentiation by income and status in employment, less attention has been paid to gender, industry and spatial differentiation. The paper analyses the following aspects: The impact of the 2008-09 economic crisis; gender reconfiguration within the informal sector; the informal sector and youth employment; improvements in educational levels; changes in industry composition; the geography of the African informal sector; and earnings. In reflecting on current policy responses to the informal sector, particularly at a national level, the authors argue that a greater understanding of these variables, and how their role may have changed over time, is critical to robust and successful policymaking. The authors explore policy implications in the conclusion.

The People's Guide to the State of South African Cities

The State of Urban Safety in South Africa Report

Effects of migration and immigration on SMMEs