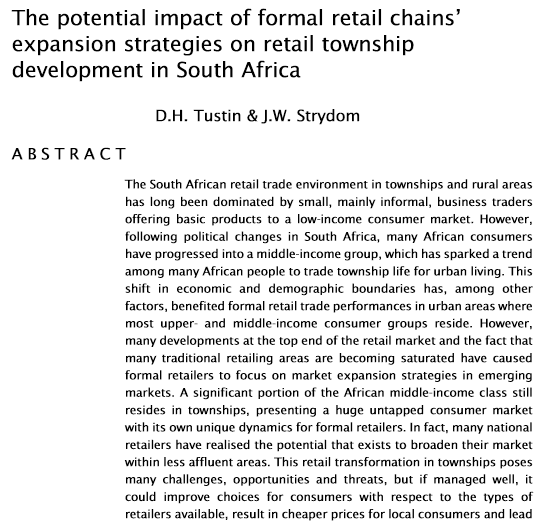 The South African retail trade environment in townships and rural areas has long been dominated by small, mainly informal, business traders offering basic products to a low-income consumer market. However, following political changes in South Africa, many African consumers have progressed into a middle-income group, which has sparked a trend among many African people to trade township life for urban living. This shift in economic and demographic boundaries has, among other factors, benefited formal retail trade performances in urban areas where most upper- and middle-income consumer groups reside. However, many developments at the top end of the retail market and the fact that many traditional retailing areas are becoming saturated have caused formal retailers to focus on market expansion strategies in emerging markets. A significant portion of the African middle-income class still resides in townships, presenting a huge untapped consumer market with its own unique dynamics for formal retailers. In fact, many national retailers have realised the potential that exists to broaden their market within less affluent areas. This retail transformation in townships poses many challenges, opportunities and threats, but if managed well, it could improve choices for consumers with respect to the types of retailers available, result in cheaper prices for local consumers and lead to a revitalisation of the ailing economies of townships.

SPLUMA as a Tool For Spatial Transformation

Voices of developers and municipalities