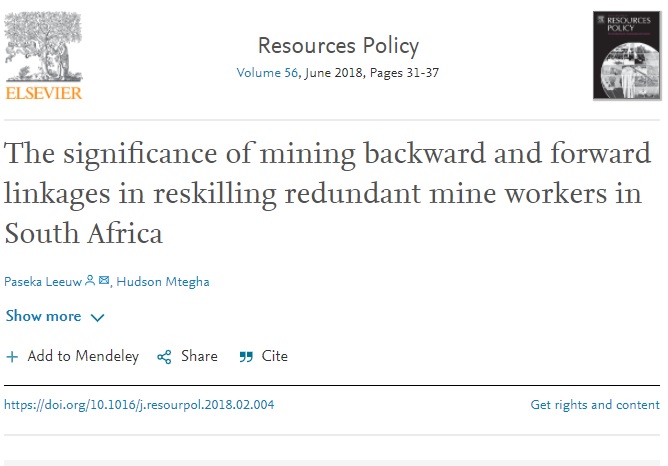 The South African mining industry employs close to half a million people. Some of the sub-sectors of the mining industry such as gold and platinum mines are regarded as labour intensive and require modernisation. To improve this situation and ensure the long term survival of the industry, the Chamber of Mines of South Africa drew up a strategy to modernise mining by embracing automated and autonomous technologies among others. The unintended consequences of these technologies is the reduction in labour, particularly in low skills categories. It is then prudent to reskill the affected mine workers to lessen the dire effects of redundancy. To this effect, this paper analysed mining forward and backward linkages with the aim of identifying the best path with the most absorptive capacity for redundant mine workers. Based on the economic analysis of mining linkages, it was realised that artisanship training is the relevant skill set for redundant workers.

This resource is part of the Mining Towns Collection kindly sponsored by the Anglo American Municipal Capacity Development Programme. Abstract based directly on source.

A comparative analysis of stakeholder roles in the spatial data infrastructures of South Africa, Namibia and Ghana