Library / The ‘thin oil of urbanisation’?

The ‘thin oil of urbanisation’?

Spatial change in Johannesburg and the Gauteng city-region 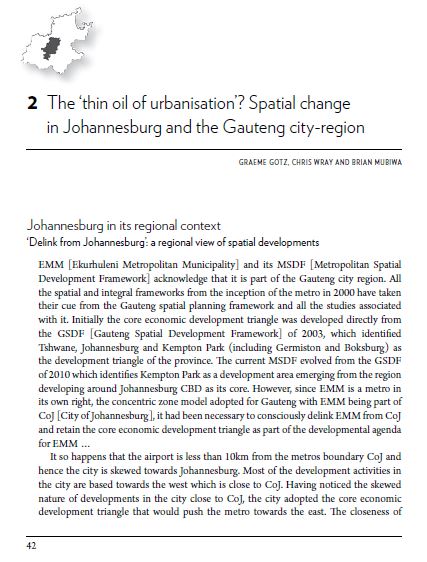 In this chapter, we consider changes in the macro spatial structure of Johannesburg within the frame of the Gauteng city-region. We first provide a schematic overview of the city-region and Johannesburg’s place in it and then give a brief historical account of key spatial trends that have shaped both Johannesburg and the region over the last century. In the latter part of the chapter we use a depiction of urban expansion over the period 1991–2009, based on satellite imagery, to anchor an analysis of more recent aspects of the evolution in spatial forms. In this inquiry, our focus falls principally on whether there has been a continuation of past patterns of urban growth in and around Johannesburg, in particular, what two scholars in the 1950s (Fair and Mallows 1959) termed the ‘thin oil of urbanisation’ – extensive sprawl with highly fragmented and discontinuous urban structures. We look specifically at the balance between changes on the edge of the built-up area, in effect extending the urban form, and those within it, leading to densification.