Library / Too Dependent to Participate

Too Dependent to Participate 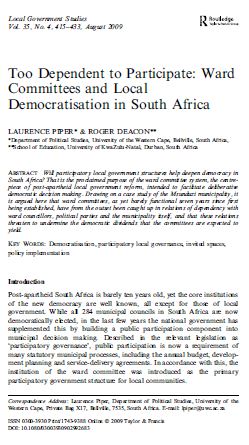 Will participatory local government structures help deepen democracy in South Africa? That is the proclaimed purpose of the ward committee system, the centre-piece of post-apartheid local government reform, intended to facilitate deliberative democratic decision making. Drawing on a case study of the Msunduzi municipality, it is argued that ward committees, as yet barely functional seven years since first being established, have from the outset been caught up in relations of dependency with ward councilors, political parties and the municipality itself and that these relations threaten to undermine the democratic dividends that the committees are expected to yield.