Core and Periphery in the Gauteng City-Region 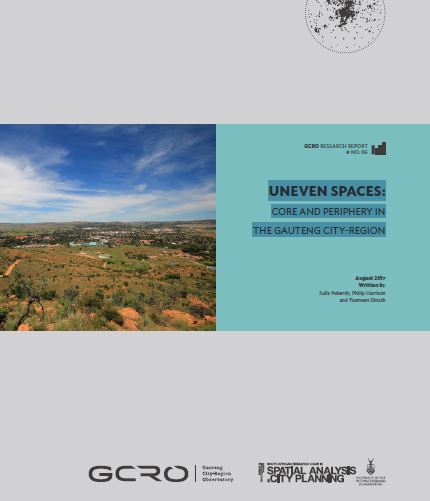 Gauteng is the richest, most productive, most populous and densely-populated province in the country. Yet, although the province produces the highest proportion of the country’s gross value added (GVA), and gross domestic product (GDP), and with its relatively strong, productive economy, it is not an even space. This report examines uneven development in Gauteng and the Gauteng City-Region (GCR), focusing on the socio-economic and demographic dynamics of core and peripheral areas. Peripheries are imagined in various ways. Theories of uneven development and marginalisation which focus on the processes of capital accumulation in shaping core and peripheral areas, underpin the discussion. These highlight how peripheral economies and areas produce raw materials, particularly minerals, agricultural products and labour, for the core. Meanwhile core economies, home to secondary and tertiary sectors, refine and manufacture products produced in the periphery. This report demonstrates that significant efforts have been made by the state to reduce inequalities between core and peripheral areas in the province, particularly in the areas of education, housing and service provision. However these efforts appear to be more visible in the peripheral areas located in Johannesburg and Pretoria (rather than the greater Tshwane area). Furthermore, at times peripheral areas may be marginalised by the state, and core periphery relationships may even be reinforced when the state focuses on promoting development and services in core areas, for instance in the location of new government housing. Some spaces are peripheral in some ways and not in other ways. Peripheral areas can be economically, socially, demographically, politically and culturally marginal. This report uses economic and population density criteria to delineate core and peripheral areas in Gauteng. Peripherality and its spatial expression are explored using demographic, migration, income and employment, housing, services, connectivity and household goods criteria. Some spaces were found to be peripheral in one area, but core in another. Expressions of core and periphery in Gauteng are complicated by the history of apartheid and social and spatial engineering. Also sitting behind the discussion is migration. Gauteng is the focus of internal and international migration in South Africa. Between 1996 and 2011, the population of Gauteng increased by 64 per cent. Over half (52 per cent) of this increase was a result of in-migration. The rapidly growing population presents challenges to government when trying to reduce inequalities.