Events / The City is [Not] a Tree: The Urban Ecologies of Divided Cities Conference

The City is [Not] a Tree: The Urban Ecologies of Divided Cities Conference 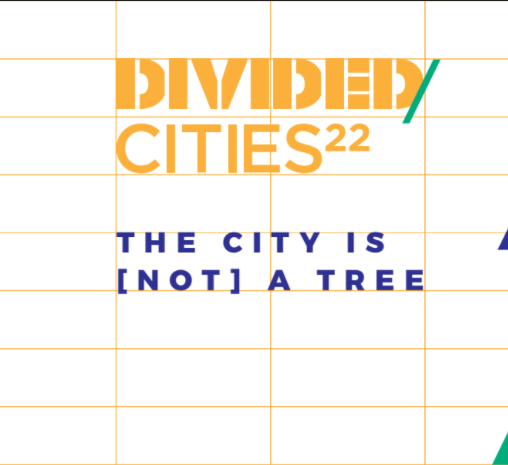 THE CITY IS [NOT] A TREE creates awareness of the problems that cause spatial, physical, political, social, economic, racial, religious divisions in cities. Architects, planners, built environment professionals, social and political scientists, economists, designers and artists will come together to discuss the reasons for the divisions as well as to conceptualise an approach to heal those divisions. The conference involves developers, local authorities, and communities in the conversation.

The fuller conception of the nature of divisions in cities means that effective principles and strategies can start to be formulated towards healing and transformation into livable and loveable places, which are a ‘home’ to more integrated communities, cities and more just and unified society.

We are laying the ground for the possibilities of a new commons, new social and physical formations, seeking ways to work meaningfully for societal advantage. We explore the different kinds of approaches, tools and possibilities that may be learned between different actors, knowledge and disciplines.

The ecologies of division shape spatialities, territories and geographies, between or within nations and different groupings. The difficult questions and tensions lay and where do these divisions manifest? Do they manifest into borders, walls, buffers and security? How were these spaces or lines socially or physically constructed, how are they policed, maintained, perpetuated or contested?

‘Place’ is neither exclusive to the building/object nor the space around it, but both are inclusive of human inhabitation, encompassing space for the individual and for society. How the actors who shape the built environment define it, is a fundamental component of human interactions and relationships. In divided and pathological societies, this suggests redefinitions and repurposing of what place/space could mean and could be. The (re)definitions of space as a first step in the making of ‘place’ and the forming of a sense of ‘home’.

Fuelled by systemic problems, the urban ecologies of divided cities appear as mutually constituted physical, psychological and social conditions. Socio-spatial realities remain entrenched upon identities and the urban psyche without even much notice or resistance. The project is an inquiry into such intersecting systemic currents, but it is also an exploration of the imaginative and potentially creative possibilities which could begin to challenge either-or binaries and offer the potential for creative space. As a collaborative and inter-disciplinary project, THE CITY IS [NOT] A TREE is also interested in the imaginative and multi-stranded confluence of memory, history, and social and political contexts, helping to construct new physical, social and symbolic ground on which to build.

Event description​​​ directly from the source.

The City is [Not] a Tree: The Urban Ecologies of Divided Cities Conference

The Path to 5G in the Developing World: Planning ahead for a Smooth Transition

Language in the City: How can our Cities "Speak" a more Inclusive Language?

Towards a Just Transition: The role of Industrial Policy

Towards a Just Transition - The role of Industrial Policy