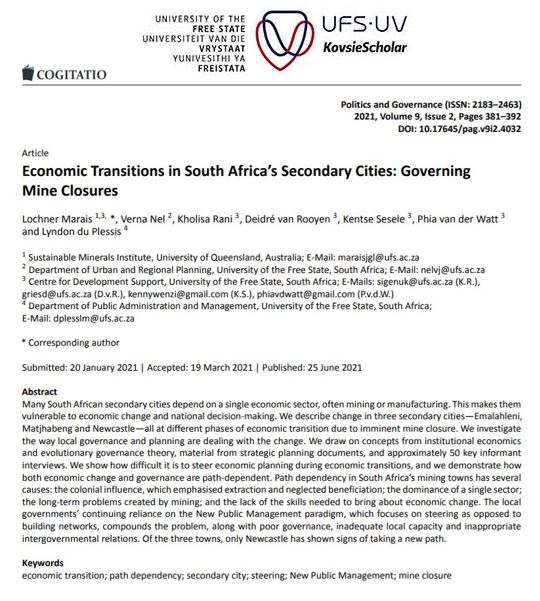 Many South African secondary cities depend on a single economic sector, often mining or manufacturing. This makes them vulnerable to economic change and national decision‐making. The authors describe change in three secondary cities—Emalahleni, Matjhabeng and Newcastle—all at different phases of economic transition due to imminent mine closure. They also investigate the way local governance and planning are dealing with the change.

The paper draws on concepts from institutional economics and evolutionary governance theory, material from strategic planning documents, and approximately 50 key informant interviews. It also shows how difficult it is to steer economic planning during economic transitions, and demonstrates how both economic change and governance are path dependent.

Path dependency in South Africa’s mining towns has several causes: the colonial influence, which emphasised extraction and neglected beneficiation; the dominance of a single sector; the long‐term problems created by mining; and the lack of the skills needed to bring about economic change.

The local governments’ continuing reliance on the New Public Management paradigm, which focuses on steering as opposed to building networks, compounds the problem, along with poor governance, inadequate local capacity and inappropriate intergovernmental relations. Of the three towns, only Newcastle has shown signs of taking a new path.


This resource is part of the Mining Towns Collection kindly sponsored by the Municipal Capability and Partnership Programme. Abstract based on source.

The morphological / settlement pattern classification of South African settlements based on a settlement catchment approach, to inform facility allocation or service delivery

How Bogotá Is Turning 7,000 Citizen Proposals into a Real Plan to Redesign a Major Thoroughfare