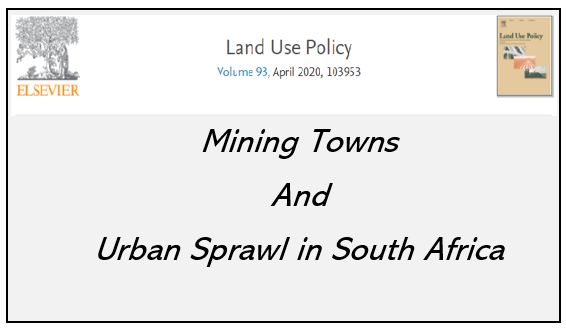 South Africa’s mining towns were established by mining companies mostly after World War II. The workforce lived in company-owned or privately-owned houses, or high-density compounds. Since the demise of apartheid, South African government policy for these towns has promoted integrated mining communities and homeownership. The government’s urban policy aims to densify the country’s urban areas, which have some of the lowest urban densities. This paper compares the changes in urban density and the unintended land-use implications of mining in settlements around five types of mines: iron ore, manganese, coal, gold and platinum, and in a combination of towns during periods of mining boom and bust. The authors ask how the South African legal framework addresses land issues that are associated with mining settlements, how urban density has evolved in the five case studies, and how this evolution should be explained. They argue that the sprawl is associated with historical path dependencies and interdependencies. Contributing factors are the need to house miners, the unintended consequences of policies designed to minimise compound living, changing labour regimes, the continuation of migrant labour and the presence of traditional-authority land. This sprawl is evident in market-driven housing, government-subsidised housing and informal settlement development.