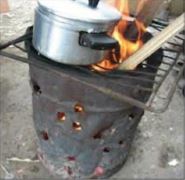 Domestic burning activities, specifically in informal settlements, contribute greatly to the air quality problems experienced by most developing urban centres. Low-income households that exist within townships in South Africa house a large portion of the South African population. These households burn vast quantities of coal, wood and other substances to provide for their energy needs. Pollutants emitted as a result of domestic burning are estimated to be one of the leading causes of respiratory illnesses in inhabitants of townships. To better understand the relationship that exists between domestic burning and the resultant pollutants, a method of quantifying these pollutants has been developed for a completely un-electrified settlement, near Johannesburg, using the quantities and type of fuel consumed. Seasonality, availability, price and cultural aspects all have a bearing on the fuel source choice and the quantity consumed. The most significant temporal observations identified for domestic burning are seasonal ones.

A Practical Guide for Mining-Affected Communities

Roadmap for Science, Technology and Innovations for Sustainable Human Settlements