Examining the possibilities for a market space and infill housing in Khayelitsha, Cape Town 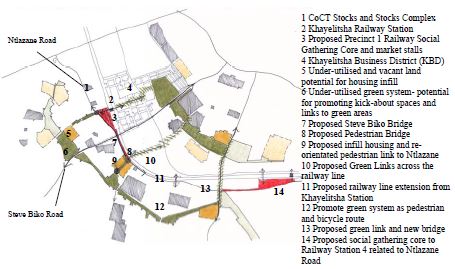 Shelter for the urban poor is often viewed in isolation from the valuable public assets that constitute an urban public environment. In low-income housing areas, the primary spatial structure should consist of positive public spaces, green systems, transportation networks with emphasis on non-motorised transport, community amenities and human-scale local interventions for informal and formal economic and social activities, where there is potential for mixed-use opportunities. Core gathering points and public spaces promote and reflect the democratic city and often form the social and economic heart of many communities. However, projects related to the public realm and associated facilities are often the first to be eroded from the public budget programme. Within a 10 year period of South African democracy, the Government has delivered 1.6 million houses nationally based predominantly on the one-house, one-plot scenario [1 & 2]. The emphasis in housing programmes has been related to the number of houses delivered as opposed to the quality of urban environments created. Taking this into consideration, there is a strong need to recognise and promote housing developments as integrated and sustainable human settlements. Primary investment in public space is crucial in areas that have minimal access to valuable outdoor space and create highly valued human assets. This paper addresses a public space in Khayelitsha.