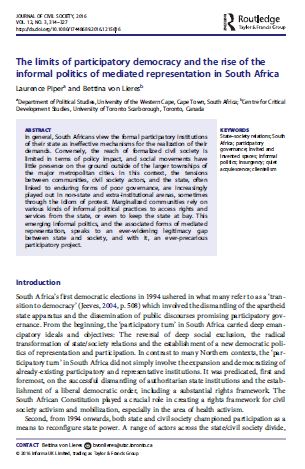 In general, South Africans view the formal participatory institutions of their state as ineffective mechanisms for the realization of their demands. Conversely, the reach of formalized civil society is limited in terms of policy impact, and social movements have little presence on the ground outside of the larger townships of the major metropolitan cities. In this context, the tensions between communities, civil society actors, and the state, often linked to enduring forms of poor governance, are increasingly played out in non-state and extra-institutional arenas, sometimes through the idiom of protest. Marginalized communities rely on various kinds of informal political practices to access rights and services from the state, or even to keep the state at bay. This emerging informal politics, and the associated forms of mediated representation, speaks to an ever-widening legitimacy gap between state and society, and with it, an ever-precarious participatory project.

Are environmental conditions in South African classrooms conducive for learning?